These are the characters from the new game Angry birds Pirates of the Caribbean.

Red Sparrow is Captain Jack Sparrow from POTC.  He can swing his sword to break blocks, much like Red Skywalker from ABSW.

Bombossa is Captain Barbossa from POTC. His power is to shoot an explosive cannonball toward wherever you tap/click.  In the episode Battle of the Maelstrom, He gets his power upgraded to shooting two cannonballs chained together.

Chuck is William Turner from POTC. His power is to throw a sword toward wherever you tap/click.

Elizabeth Swnn is played by a new bird. Her power is to speed up whenever you tap/click, just like Chuck in the original game.

Joshamee Gibbs is played by Matilda, but as a male. He doesn't have a power, like Red from the origianal game.

James Norrington is part the east india trading company, but helped Elizabeth Swann's pirate crew escape the navy,  so he is a bird. He is played by the blue bird. His power is splitting into three birds. 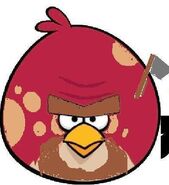 Ragetti
Add a photo to this gallery
Pintel and Ragetti are bonus characters that you can unlock by finding a golden peice of eight.  Pintel swings an axe when you tap or click, an Ragetti drops his eye, and if you click/tap again, or if he hits something, he yells "Me eye!" and flys toward it's eye, destroying everything in it's path.

In the episodes Queen Annes Revenge through In The Jungle Philip is playable. His power is just like Red Birds power in ABO--Which is none! Syrena is just for the cutscenes. 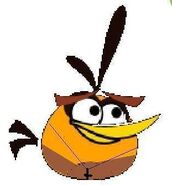 Syrena
Add a photo to this gallery

Blackbeard is non-playable, and is only for the cutscenes. He is a new bird.

Angelica is blackbeards daughter, and wants to save his soul from eternal Hell. She is a new bird, and her power is toswing an anchor, just like Zam Wessel from ABSW2.

Piggy Jones is a boss that can jump around and swing a sword.

Piggy Jones' crew are just like minion pigs, but some can swing swords or shoot cannons.

The Pigagostos are minion pigs that live on isla de Pelagostoe. They are cannibles who threaten to eat Red Sparrow and his crew. They swing spears and sometimes shoot arrows.

Lard Cutler Beckett is the leader of the east india trading company. He is a boss pig who jumps around.

The soldier pigs are minion pigs, some of them shoot at the birds. They work for Cutler Beckett to kill off pirates.

Zompigs are pigs that Blackbeard has zombiefied, so they do his will better than normal birds or pigs. They are minion pigs.
Retrieved from "https://angrybirdsclub.fandom.com/wiki/Pirates_of_the_Caribbean_characters?oldid=5605"
Community content is available under CC-BY-SA unless otherwise noted.